So it appears the British are our last best hope of stemming the blood-dimmed Putin-Nazi tide that has shaken the foundations of Western democracy since Hillary Clinton lost the election. The neoliberal Resistance in the United States, led by the intelligence agencies, the Democratic Party, and the corporate media, fights on, but it’s a losing battle. Despite their control of most of the media, most members of the US Congress, and the military industrial complex, they are just no match for the fearsome power of Vladimir Putin’s international army of Nazi-brainwashing specialists and the evil genius of Donald Trump. All is not lost by any means — there is still the chance that the CIA might stage a coup, or a heart attack — but for now it seems that the ruling classes (and the millions of Americans who identify with them) are lying low and biding their time like Camembert-slurping surrender monkeys.

Thus, once again, it’s up to the Brits to save democracy from annihilation. They’re doing a bang up job of it so far. Just look at how they’ve responded to the so-called “Labour Anti-Semitism Crisis,” which exploded just a few short weeks ago. No sooner had members of the neoliberal Blairite wing of the Labour Party dug up a six-year-old Facebook post in which Jeremy Corbyn had the gall to wonder why a mural depicting a group of bankers (some of them sporting rather large schnozzes) needed to be removed from view, did the British ruling classes spring into action. Clearly, this 2012 Facebook post was proof that the Corbyn-led Labour Party had been infiltrated by a Nazi Death Cult bent on brainwashing gullible leftists into “failing to recognize Anti-Semitism,” using unwords like “Zionist,” and inappropriately criticizing Israel. The public needed to be alerted immediately, so the media started pumping out stories repeating the words “Corbyn” and “Anti-Semitism,” over and over, in a variety of contexts. At this point, there have been literally hundreds of them.

The conservative press has been entirely predictable, running headlines like “Jeremy Corbyn’s Hate Factory,” “Once in the shadows, anti-Semitism is now entrenched at the poisoned heart of the Labour Party,” “Theresa May slams Jeremy Corbyn for letting anti-Semitism, misogyny and hatred run free in Labour,” and so on. But it’s the liberal media that are doing the heavy lifting. The Independent warned the world that “Labour’s antisemitic cancer shows the party for what it has become — a cult of keyboard warriors and raging Corbynistas.” Michael Segalov, writing in The Guardian, put potential Corbyn-apologists on notice: “If you can’t see antisemitism, it’s time to open your eyes.” Owen Jones has been conducting a virtual one-man anti-anti-Semitism crusade, reminding the public on an hourly basis that “the poison of anti-Semitism” exists, and “the left has to get its house in order,” and otherwise reinforcing the connection of Corbyn with anti-Semitism.

Which, of course, is the purpose of this manufactured “crisis,” i.e., to associate Jeremy Corbyn with anti-Semitism in the public consciousness. The content of all these impassioned articles (whether attacking or defending Corbyn) is, if not irrelevant, secondary. Their primary aim is to generate the “crisis,” and then position Corbyn in the middle of it.

Here’s a quick lesson on how that works.

Say, for example, we wanted to simulate a “Racism Crisis” in Hollywood and smear a certain producer with it. This should be easy enough to do, as there is plenty of racism in Hollywood to work with (just as there is plenty of anti-Semitism in the Labour Party, and in most other major political parties). And let’s say we want to kick off this “crisis” by citing some “inappropriate response” by some well-known producer to a Facebook post about a movie featuring a Magical Negro, that loveable, mystical African American who exists to serve the white protagonist, a familiar stock character in American cinema. OK, so we go dig up that post, in which our target “fails to recognize the racist nature” of the Magical Negro depicted in whichever movie we choose, Forrest Gump, The Shawshank Redemption, The Green Mile, The Shining, The Matrix, or whatever, and we demand a full confession and apology. Next, we go digging for any other comments, posts, tweets, quotes, or hearsay that we can easily construe as “glaring proof” of our target’s racism. At the same time (and this is absolutely crucial), we go digging among our target’s current and former associates, and their associates, and any random Facebook groups our target has ever carelessly joined, and tweets our target has ever carelessly “liked,” and anything else we can possibly link to him, until we can claim to have firmly established that Hollywood is experiencing a “Racism Crisis,” and that a “cancer of Racism” is running rampant through the Screen Actors Guild and Writers Guild West. Then we get our associates in the corporate media to make an incredibly big stink out of it, and argue “both sides” of the “crisis” we’ve just generated. Half the media can attack our target as a racist or a racism enabler. The other half can do the Owen Jones schtick, repeatedly confessing that, yes, indeed, Hollywood has a racism problem, a corrosive, longstanding racism problem, which has suddenly grown to crisis proportions and … I think you get the general idea.

This is just an example, of course. Because, clearly, there’s no Racism Crisis in Hollywood, or, rather, the global capitalist ruling classes have no reason to generate one. They do, however, have a reason to generate an Anti-Semitism Crisis and use it to demonize Jeremy Corbyn, and anyone else they deem an enemy.

As I’ve been tracking for going on two years now, the global capitalist ruling classes are putting down a nationalist insurgency … the populist backlash against global capitalism that led to the Brexit, the election of Trump, and the rise of nationalist parties in Europe. They are conducting this counter-insurgency against an assortment of forces on both the left and the right. Ideology makes no difference to capitalism, which can accommodate pretty much any ideology as long as it doesn’t interfere with the market. Hard as it is to get our minds around, what we’ve been living through since 2016 is not a battle between left and right. It’s a battle over sovereignty. Since the end of the Cold War, global capitalism has been dissolving national sovereignty and replacing it with supra-national sovereignty … corporate supra-national sovereignty. A lot of people, on both the left and the right, are not real happy with how that is going and are resisting the only way they know how to, by reasserting their national sovereignty. The global capitalist ruling classes cannot allow this rebellion to continue, not when it leads to events like the Brexit, the election of Trump, and the destabilization of the entire Western neoliberal order.

Which brings us back to the Putin-Nazis and the War on Dissent that the global capitalist ruling classes are currently waging against any and all resistance to their brave, new global capitalist world. Because they are unable to characterize the nature of this conflict as what it is, they need a convincing “official enemy” to scare the living Bejesus out of people. This is where the Putin-Nazis come in.

For the last two years, as you’ve probably noticed, the corporate media have been not so subtly alternating between manufacturing Russia hysteria and Nazi hysteria, and sometimes whipping up both at once. Thus, I’ve dubbed the new Official Enemy of Freedom “the Putin-Nazis.” They don’t really make any sense, rationally, but let’s not get all hung up on that. Official enemies don’t have to make sense. The important thing is, they’re coming to get us, and to kill the Jews and destroy democracy … and something about Stalin, if memory serves. Putin is their leader, of course. Trump is his diabolical puppet. Julian Assange is … well, Goebbels, or something. Glenn Greenwald is also on the payroll, as are countless “useful idiots” like myself, whose job it is to sow division, discord, racism, anti-Semitism, anti-capitalism, anti-Hillaryism, collusion rejectionism, ontological skepticism, and any other horrible thing you can think of.

Where does Corbyn fit into all this? Well, obviously, he’s been quietly building his extreme-left Putin-Nazi Death Cult in the shadows of British politics for years. If the Blairites hadn’t tracked down that telltale comment in his six-year-old Facebook post, who knows what horrors he and his legions of cultists might have unleashed on Britain.

Oh, gosh, here I am, over my word limit, and I got all wrapped up in that Churchill parody and completely forgot to virtuously signal my steadfast opposition to anti-Semitism … but then I’ve never been very good at responding to emotionally manipulative Pavlovian stimuli. I’ll have to work a little harder on that. 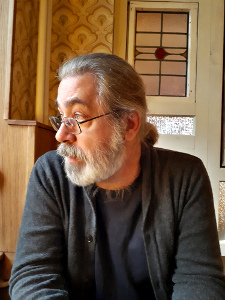